This Birmingham Woman May Get Arrested for…WHAT?

Friday, May 1st was Ana Sullivan’s birthday.   But not even the gorgeous weather we’ve been having could brighten up this major birthday bummer…

On that very day, the City of Birmingham gave her a “present” in the form of a notice.    It was a warning that if she didn’t correct a certain something within 14 days, a warrant would be put out for her arrest.

These flowers to be exact:

Ana planted them in her front yard, located in the Avondale neighborhood, along with some cosmos and poppies.

What’s the catch, you may be thinking?  Certainly, there is something else going on, right???

I went to her house to check out the situation and get a closer look.  Surely, someone cannot be arrested for flowers!

Here is what I saw:

Sure enough, here’s the letter: 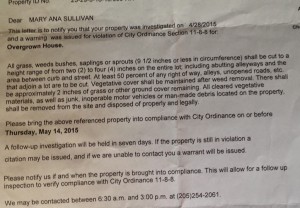 I asked her about the jasmine that covers and shades the front porch, thinking that maybe there are some laws about that.  She said, no, that it has been there for years, and that was not what the letter was referring to, (to which I agree).   She also disclosed to me that this time last year, while attending her daughter’s end-of-the-school-year party, she came home to see her yard (oops, sorry, the right of way between the sidewalk and the street) cut — yes, CUT DOWN.  Last year, she was given no notice, no warning, and a neighbor confirmed that indeed it was someone from the City who had done it.

At least this time, the City of Birmingham had the decency to allow her to cut them herself? 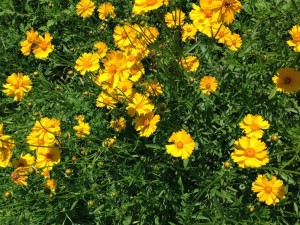 Ana is currently in touch with several members of the community to get to the bottom of this.  The woman at the phone number on the citation loosely claimed that it was the “undergrowth” to the coreopsis, not the yellow flowers themselves, but Ana was quick to point out that those too, were flowers (cosmos) that just haven’t bloomed yet.  Plus I’m not sure how this logic plays out in accordance to the 2-to-4-inch rule mentioned in the letter.

It seems that there are a couple of species in her yard that are supposedly federally protected as well…which could make this whole thing even more interesting.

HOW YOU CAN HELP:
Spread the word!    Change takes all of us!  Ana is also concerned that 14 days is an unreasonable amount of time to figure out what to do and what her rights are.  If you can help, please email her at m.anasullivan@yahoo.com

Remember…
A few years ago in Los Angeles, Ron Finley was arrested for “guerrilla gardening” (this time it was food) in those patches between sidewalk and street.  ARRESTED…for gardening.

But because of the outrage of the community, the pressure caused the city to change these ridiculous laws!  Now you can grow veggies (as well as flowers) in the areas technically owned by the city.  Note that Finley was planting in food deserts; it’s a good thing that men like Finley are working to make our cities healthier and more livable!

Here’s his Ted Talk if you need some mad inspiration. 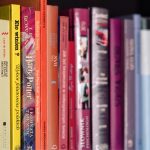